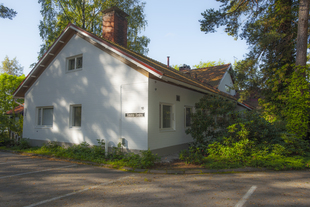 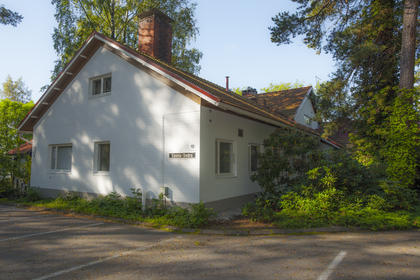 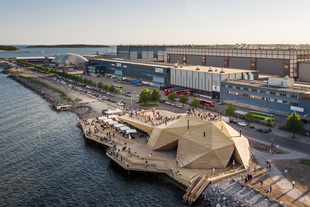 Löyly Sauna
Opened a year ago in Hernesaari, Löyly has activated a formerly sleepy industrial part of town, equipped with a view of the sea resembling the outer archipelago. The idea for a new public sauna in Hernesaari came from the City of Helsinki and the design process was started already in 2011. After several stages, the duo Antero Vartia and Jasper Pääkkönen took on the construction challenge and the sauna building let out its first steam for the crowds in summer 2016.

The Hernesaarenranta shoreline is part of the greater Helsinki Park outlining the city along the sea. There was no wish to cut off the green areas through constructions, so the building was made as slim as possible. The building mass is kept at a low height to not distort the view of the sea from the buildings behind it. Löyly found its form in an extraordinary shape mimicking a landscape, blending into the scenery. When the wooden surface matures into a shade of grey, it becomes like a rock on a beach.

The three sauna rooms in Löyly are all wood-heated, one of them the only public smoke sauna found in the city. Visitors can experience all three "löylys" or steams in one visit. The heated areas are covered by a freeform canopy-like wooden structure. Made of heat-treated pine, the sculptural construction is not a decoration: it functions like blinds and offers both a view out to the sea, as well as blocks visibility from the outside in. There are several areas for cooling down outside left between this roof-type structure and the inner spaces. 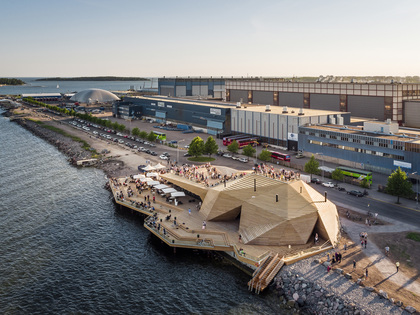 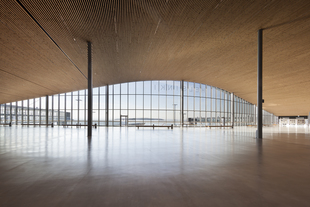 The terminal caters to passengers boarding ships on foot. The terminal has been built on a landfill site between two designated ship berths to minimise the distance to board the ships. The aim of the project is to ensure a fluid and comfortable passenger experience. At the same time, the aim is to enrich the harbour's cityscape with a new public building.

The outdoor construction efforts are still in the making and await the finalising of the surrounding street areas.

The tour explains the terminal's architecture and functions. 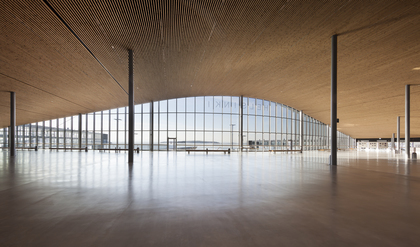 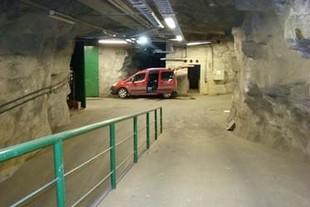 The first one of these shelters was built in 1973 inside a rock to fit 5000 people. The shelter was renovated in 2015. The space acts as a shelter in times of crisis, and remains disused during peace.

The tour explains the functions of the shelter and offers an adventure in the tunnels. 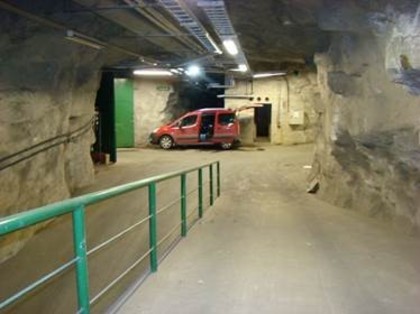 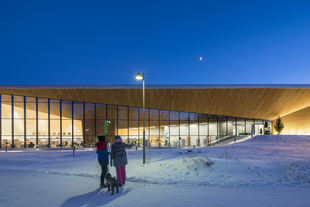 The Maunula House is a focus point of culture and education in a neighourhood under renewal. The community centre is situated at the edge of the Maunula Park in the newly-renovated centre of the district. It offers diverse public services for citizens of all ages. The Adult Education Centre, the library, the Youth House and a community advisory board work in close collaboration, which allows the spaces to be used flexibly and efficiently.

The Maunula House has been designed as a pilot project in the City of Helsinki's experimental democracy initiative. The design process started with several resident workshops before any other planning. The local community played a big role in shaping the activities of the Maunula House.

The common spaces have been situated in the centre of the building around the main entrance, including a community café run through a youth employment project. The Adult Education Centre spaces are placed on the top floor. There is a direct access to the premises through the S-market supermarket. The youth spaces have been separated by an entrance on the southwestern side of the lot.

The pale tile facades tie the building to its surroundings. The folded lower roof is lined with wood and continues the visual feel from the interior outwards, granting the building a very particular spirit. A glass wall opens a view of the park and brings light into the library. The lobby spaces are graced with a golden yellow skylight above bringing space and light inside.

The adjacent park will be redone in spring 2017. It will become a functional extension of the House hosting common events. A centre piece of the park will be an artwork entitled Family Tree: Betula pendula (1948-2016) by the artist duo IC-98, or Visa Suonpää and Patrik Söderlund. The work is split into two parts: an apple orchard to be planted in the park, and graphic prints found in the library inspired by old birch trees that used to stand on the lot. 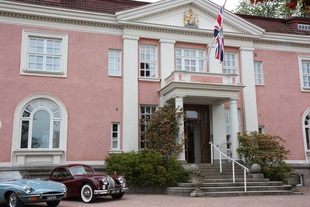 The tour takes place in one of the most beautiful villas of the Kaivopuisto district, with peeks into its formal spaces, garden and kitchen.

The building has served as the British Ambassador's residence already for 90 years and has hosted many noteworthy events, such as the Duke of Edinburgh's visit to Helsinki's Olympic Games in 1952, and the Queen's visit in 1976. The former prime minister Margaret Thatcher also visited the residence in 1990 upon her inauguration of the embassy's office building.

Today, the residence remains largely the same as in the early years, doubling as the ambassador's private residence and as a location for embassy events. 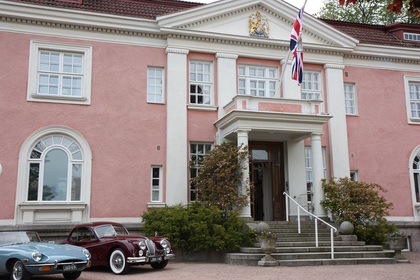 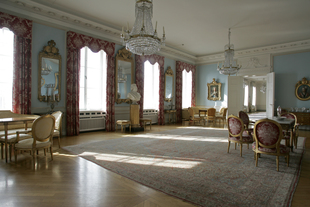 Embassy of Sweden
Welcome to the Swedish Embassy!

The complex housing the Embassy of Sweden in Helsinki was built in 1839-43 as a private residence for the commercial counsellor Johan Henrik Heidenstrauch. The original designer's identity is unclear, but there is strong evidence pointing to the Finnish architect Anders Fredrik Granstedt.

Russian-born commercial counsellor Jacob Loginoff Tschernischeff purchased the premises in 1883. The architects Konstantin Kieseleff and W. Reiss headed a radical renovation operation where the facade was given strong baroque influences, then fashionable in Russia. Some nasty tongues even spoke of "pompous architectural decorations". The private palace transformed into rental housing for diverse social groups. The highest population in the housing complex was 150, most of these Russians living in Helsinki.

Sweden was one of the first countries to give official recognition to the independent state of Finland. While searching for a suitable embassy building, Swedish eyes landed early on the house of Tschernischeff. Due to historical reasons, it was seen important to set up the embassy in a central location, right by the Market Square, a stone's throw away from the Presidential Palace. Sweden sealed the deal in 1921 for a sum of 400 000 crowns.

To suit its new purpose, the house went under renovation. The repair efforts were managed by Swedish architect Torben Grut, who was well respected for his notable design projects, such as the Stockholm Stadium, and the royal summer house Solliden on the island of Öland.

Grut's commissioners wished that the building were to serve as a visual connector across the Gulf of Bothnia. Grut turned to the younger palace architecture of Nicodemus Tess and his Italian Renaissance idols. It is no wonder that the embassy building resembles the royal palace of Stockholm when viewed from the Lejonbacken side. 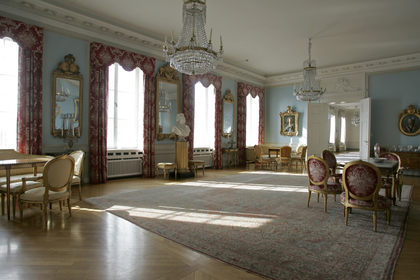 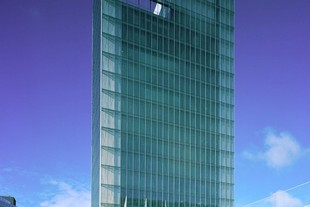 KONE Building
The KONE Building - the headquarters of the KONE group - rises 18 floors above sea level. The landmark's facade is composed of four elevator shafts and their four elevators moving up and down.

The long sides of the building are lined with silk-printed glass. The shifting patterns are designed by textile artist Outi Martikainen.

The glass paneling gives shelter to an outdoor terrace on the 16th floor overlooking a beautiful view reaching all the way to Tallinn on a clear day.

The building's original interior is designed by professor Yrjö Wiherheimo. 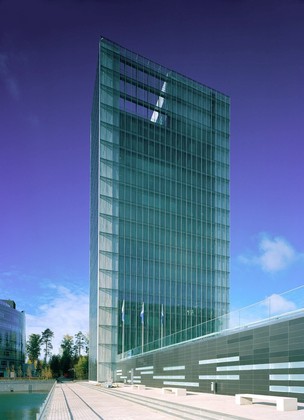 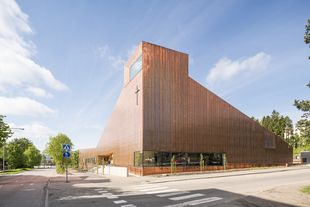 Suvela Chapel
Suvela Chapel is located in Suvela, Espoo, in one of the most multicultural districts in the metropolitan area of Helsinki. Attention to the needs of the culturally diverse community is a core principle in the project.
All functions are placed on one level, and the building wraps into a single U-shaped entity forming an intimate interior courtyard in the middle. The different functions in the building orient themselves around the inner courtyard. There are facilities for a range of different uses from a kindergarten and childcare to spaces for the youth as well as for the local community clubs. The building offers office space for the employees as well as for social workers and family services. A soup kitchen providing food for a very low cost is also operating in the premises. The chapel naturally also serves as a place for mass, concerts, weddings, funerals, and baptisms. 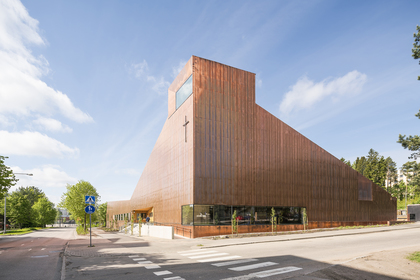 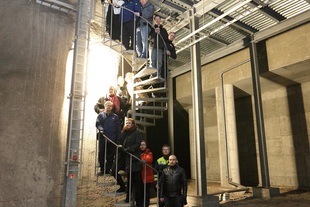 OHH & Metro & HKL open together:
Metro ghost stations: Hakaniemi and Kamppi
Most citizens and visitors are not aware that there are alternative metro stations that were never finished underground below the current Hakaniemi and Kamppi stations. They were built in the 1970s to fit into the initially proposed U-shaped metro line. The line was never built and the unfinished stations remain in the depths. Now their only soundtrack is the metro traffic from above. The Kamppi station even has rubble banks waiting for the north-south running metro cars that never came.

Welcome to the ghost stations! We will visit two such stations in Hakaniemi and Kamppi. The tour also offers a peek into the Helsinki University station's eastern entrance plans and emergency exit routes. 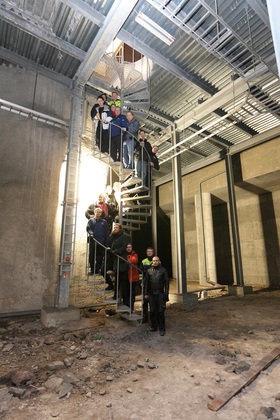 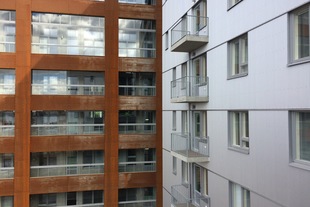 Jallukka - House for Musicians
Jallukka is a rental apartment building and long-term dream and project of Helsinki's Live Music Association Elmu. The house offers affordable rental flats for people in the music business and it has been developed together with the Y Foundation. Elmu is in charge of 25 of its 74 rental units. The residents moved in in March 2017.

Elmu's apartments are located on the Malagankatu side of the building, with its own signature look and feel that comes from Cor-Ten steel sheet: it will age in the coming years to create a luscious, lively tone. The gallery access house also uses concrete: in the Jallukka apartments, concrete is also used in the interiors. The alley side and courtyard facade feature Danish hand-shaped tile.

The building has two large rooftop terraces with common spaces and a sauna. The ground level has a common laundry room. In addition, the cellar has rehearsal rooms. A restaurant is planned to be opened in the corner space of the building. 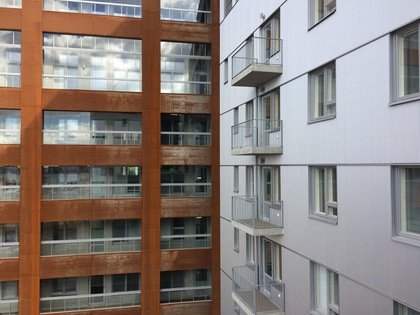 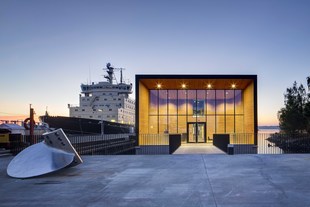 OHH & Metro open together:
Arctia's floating office and icebreaker dock
The icebreaker shipping company Arctia's office has been constructed on a floating steel pontoon. A water ballast system ensures that the buoyant office remains at level with the dock. Finland's first floating office was awarded by the Finnish Association of Civil Engineers in 2013.

The horizontal frame and black metallic facade bring to mind the traditional icebreakers made by Arctia. The two-storey office building fits in naturally among the icebreakers, although smaller in scale. The entrance lobby is made from softly curving lacquered wood. The tour is hosted by an architect from K2S Architects.

Arctia's legendary icebreakers Voima, Urho, Sisu, Otso, Kontio and Polaris are an essential part of Helsinki's summer cityscape. In winter, their job is to keep the country's ports open and to assist other ships in the icy conditions of the Arctic Sea. The tour-goers have time to admire these icebreakers from the dock. 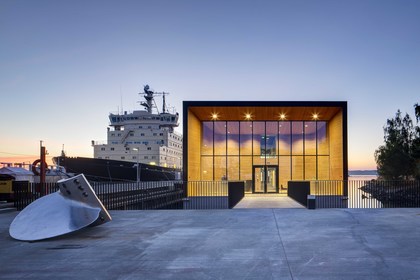 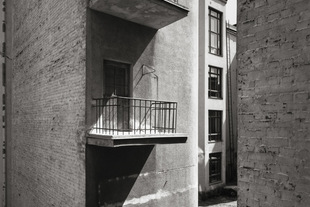 The tours open a backdoor to the most central unknown side of the city: the backyards and visible layers of historical housing blocks. Closer looks at the houses around the Senate Square and Aleksanterinkatu unravel a layered history starting from the 18th century with small and large gestures, surprises and oddities. The know-how of the tour stems from the books written by Juha Ilonen, who will also guide the tour. 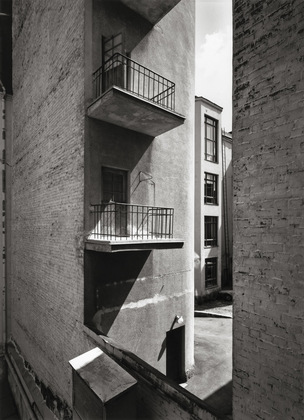 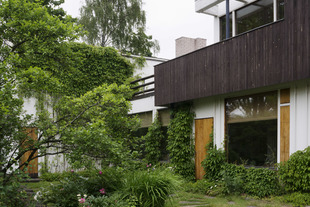 Aino and Alvar Aalto designed the house in the neighbourhood of Munkkiniemi to suit the needs of both a family and an architectural office. The building was completed in 1936.

The human proportions of the house and its spaces, as well as using natural materials, manifest Aalto's human-centric functionalism. The feeling is both stylish and cosy, marked with the distinctions of 1930s architectural modernism in both function and style.

The Riihitie house was a private residence until the late 1990s. It was opened to the public in 2002. 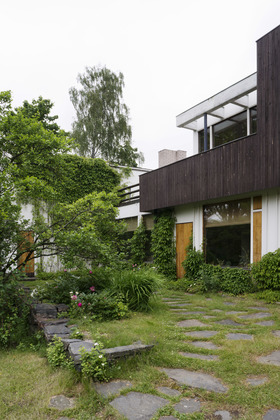